After a two-year bout with veganism in my 20s that caused my cholesterol to plummet to dangerously low levels and left me with multiple daily episodes of low blood sugar and scary low body weight, I vowed never to dabble in any kind of “fad” diet again. (I know, I know, veganism isn’t really a fad, but it is an extreme diet by most estimates.)

I was in my first year of naturopathic medical school, taking an Intro to Chinese Medicine course, when several of my colleagues and I were jostled out of our delusions of vegan grandeur and made to realize that the way we were eating was actually contributing to our extreme med school fatigue, instead of easing it. 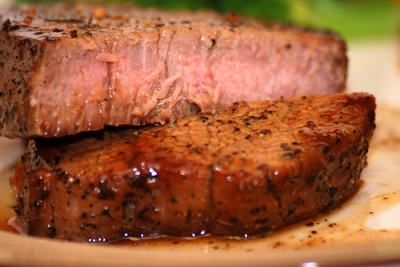 I did’t tiptoe lightly back into my omnivorous lifestyle with a piece of cheese or some yogurt. No, sir. I went right out and ordered me a big, fat, juicy steak. And I never went back to my vegan ways again.

Even so, when I first heard rumblings 15+ years back about people eating “paleo,” I filed it into the recesses of my mind along with all the other vogue diets-of-the-day that I uniformly dismissed as over-the-top, unhealthy, unbalanced, or just plain old crazy.

But all that changed two weeks ago.

I’m a pretty healthy person, overall. I eat a boatload of veggies, blend up green smoothies almost daily, limit my refined sugar intake to almost nothing, and get plenty of whole grains, legumes, and lean protein.

However, there was one minor little thing that had gradually crept into the not-so-minor category in my health life.

Acid reflux, also known as heartburn or GERD (gastroesophageal reflux disease), plagued my nightlife with persistent, intractable symptoms that even the best naturopathic remedies had failed to touch.

Get off your rear

I recently had an assignment to write a feature article on how to gain muscle and lose fat. Seeing as I’m not exactly a bodybuilder extraordinaire (or even ordinaire), I consulted someone who I knew could fill me in: a trainer named Nate Godfrey who owns a local gym that many of my friends frequent, called Cross Fit 401.

Though I offered to remain on my couch for the interview, Nate insisted that I come into the gym to “see it in action.”

When he had me do a couple of squats with a kettle bell that left my quads quivering, naturally, I blamed the nasty viral infection that had settled itself in my muscles over the past week.

But reality set in over the next few days. I am seriously out of shape.

Nate handed me a book on my way out of the gym. It’s called The Paleo Solution: The Original Human Diet

Uh huh. Okay. I’ll read your propaganda but no way am I buying it. After all, I have a degree in naturopathic medicine and, well, people need grains, right?

But what kind of natural health investigator would I be if I didn’t at least skim the book? Most of what he said is pretty standard knowledge in the field; people should eat lots of vegetables, pasture-raised meats and eggs, fish, some fruit, and beaucoup nuts. I’m down with that.

So what about grains and dairy?

Well, milk is made by mothers for their babies; human milk for baby humans, cow’s milk for baby cows. (I remember harping on this when I was vegan.)

And, yes, it’s true that humans evolved for most of our time on earth without eating grains.

I really didn’t want to be here, thinking about this. I really love my morning kefir and granola.

Nevertheless, just for giggles, I decided to try going practically paleo for one week. I am a hardcore corn addict, so that snuck in a couple of times. And a little rice. But other than that, I ate no dairy or grains.

And guess what? I felt better. (Big shocker to those paleo diet enthusiasts out there, I’m sure.)

But seriously. I help people for a LIVING! And now I had finally helped myself when no one else could.

Now, instead of propping myself up with nine pillows to help guarantee sleep, I lie down comfortably after any meal (that’s right, even meatballs and tomato sauce can’t touch me) and drift off to dreamland, reflux-free.

It might be a coincidence; I do have ups and downs at different times of the month. But you have to admit, that’s one heck of a coincidence.

My husband was as shocked by my shock over the immediate and drastic results I got as I was at the results themselves. I think he said something like, “I’m just not sure why, as a naturopath, you’re so surprised.”

But since I am, forever and always and foremost, a scientist, I just needed to know more. Like, how many of my colleagues are prescribing the diet to their patients? For what types of conditions? And what kind of success are they seeing with it?

Here’s what other NDs are saying.

The Paleo diet seems to work really well for people with:

Dr. Terry Wahls has helped popularize the Paleo diet since she cured herself of MS (multiple sclerosis) after following a hunter/gatherer type diet. You can learn more about her journey by watching her talk on TED here, or by reading her book, Minding My Mitochondria 2nd Edition: How I overcame secondary progressive multiple sclerosis (MS) and got out of my wheelchair.

I’m not saying I’m going to do this forever, but right now, I actually have enough energy to think about “forever.”

And in case you’re wondering, I’ve decided to tackle my super-soft middle (along with the rest of my neglected mama body) that my girls affectionately refer to as my “pillow.” (Sounds dreamy, huh? Bet you wish you had a pillow, too.)

Disclaimer: The information contained in this blog is for educational and/or informational purposes only, and is not intended to diagnose, treat, or prevent any condition. If you have any concerns about your own health or that of a family member, you should always consult with a healthcare professional.

© 2012-present. Unauthorized use and/or duplication of this material without express and written permission from this blog’s author and/or owner is strictly prohibited. Excerpts and links may be used, provided that full and clear credit is given to Kimberly Beauchamp, ND and Ask Doctor Mama, with appropriate and specific direction to the original content.

The information contained in this blog is for educational and/or informational purposes only, and is not intended to diagnose, treat, or prevent any condition. If you have any concerns about your own health or that of a family member, you should always consult with a healthcare professional.

Some posts contain affiliate links to various products or services that I recommend. You are not obligated to purchase through these links, but when you do, a small percentage goes to supporting this blog and my family.
%d bloggers like this: