Why My Girls Are Learning Self-Defense

I’d wanted to take a self-defense class with my daughter for years, but something kept holding me back.

I thought, What am I telling the Universe by engaging in and thinking about protecting myself and/or my kids? Is that actually, inadvertently bringing something bad to me/us? I mulled it over for months, years, talking with friends and family, always pulled equally in both directions: Focus on what you want. Be prepared for anything.

Not to mention the fact that it was hard to overlook the obvious gap in our approach as a society, whereby we accept that we must, as women, learn to protect ourselves against men, instead of looking at what we can do to change how men feel about and treat women, and bringing about this change by how we raise our boys.

I brought these questions with me when I finally signed us up for a mother/daughter self-care and self-defense class taught by local expert, Anne Kuzminsky. What got me in the door in the first place was knowing Anne; our daughters had gone to preschool together and when I heard that she taught this course, I knew it wasn’t to be missed. In addition to a BS in Psychology from Yale, Anne has a 7th degree black belt in the Martial Arts and extensive training in empowerment-based violence prevention. If anyone was going to teach my daughter and me about self-defense, I wanted it to be Anne. 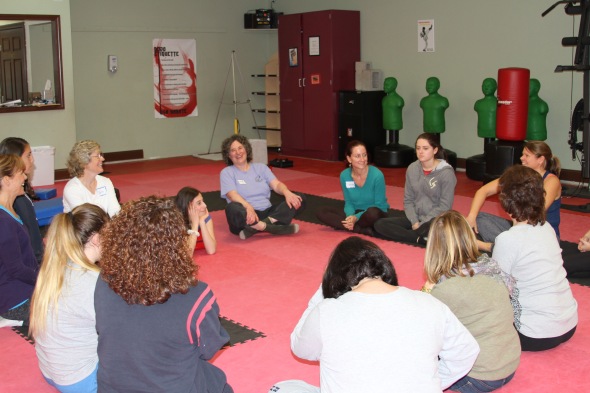 From Self-Defense & Self-Care for Women & Girls 14 and Over with Anne Kuzminsky, course leader (center)

Lee Paiva, founder of No Means No Worldwide, also took part in the class. Lee’s work focuses on rape prevention, predominantly in sub-Saharan Africa. Her program, which combines empowerment, deescalation, and self-defense techniques has helped significantly decrease the incidence of sexual assault among the adolescents who take part in the intervention. The girls are also more likely to report an assault, aiding in identification of the perpetrators and helping the girls get the support they need.

Lee addressed my concerns in a way that I could really relate to as a doctor, and as a mother. She acknowledged the need for societal change, and she talked about an educational program that she helped develop to raise awareness of social issues underlying gender-based violence on attitudes and behaviors of male high school students in Nairobi, Kenya. After the 6-week course, the boys’ attitudes toward girls/women improved significantly, and 75% of them went on to intervene when they witnessed a female being harassed or assaulted.

Here in the US, college campus programs whose message is to “teach men not to rape” focus on getting men to make sure they have their partner’s consent.

In a nutshell: something IS being done to help shape men’s attitudes around the world.

And while this is encouraging, it’s not enough.

The biggest reason might be that most men don’t need to be told not to rape. For those that do, hearing the message that it’s not OK to rape a woman probably isn’t going to deter them from doing so.

Bottom line: There are always going to be some bad people out there, so it’s important to have the tools to deal with them effectively.

Turns out, learning self-defense is pretty similar to any other kind of prevention. Just as we sometimes need to tweak our diet, take a supportive supplement, or maybe even (*gasp*) get a prescription to prevent heart disease, for example, we also need to equip ourselves to deal with dangerous situations in life.

One of the most effective ways to prevent violence, including sexual assault, is by learning some basic self-defense techniques.

According to an article by Dr. Scott Bonn, professor of sociology and criminology at Drew University, self-defense training can:

Contrary to some opinions, self-defense training does not encourage victim-blaming or promote rape culture.

In an opinion piece in the Boston Globe, Cathy Young pointed out that just as we don’t say that alarm companies promote “burglary culture,” neither should we conclude that learning self-defense promotes rape culture. 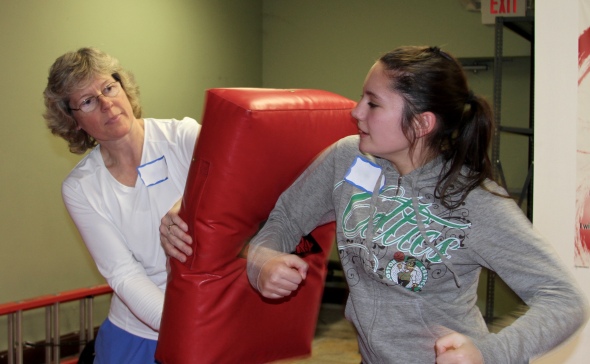 We left that class with an arsenal of ways to protect ourselves. I also discovered that it was not only OK to teach my girls to defend themselves, but that I’d be doing them a disservice by not training them in self-defense.

As I’ve sat with Anne’s words and repeated the mantras that Lee taught us, I’ve started to think about the notion of what protection really means. Isn’t everything we encounter in nature set up with some natural defenses? The Hawthorne tree, for example, embodies in its physical form what it’s used for in traditional medicine: giving strength, protection, and a sense of openness to the heart. The thorns of the plant protect its berries. Outer strength protects inner tenderness.

These bodies, these minds, these souls, they’re a gift. And they deserve to be treated with respect. I believe that respect starts with each individual. Love yourself enough to protect the gift that is you.

One thought on “Why My Girls Are Learning Self-Defense”

© 2012-present. Unauthorized use and/or duplication of this material without express and written permission from this blog’s author and/or owner is strictly prohibited. Excerpts and links may be used, provided that full and clear credit is given to Kimberly Beauchamp, ND and Ask Doctor Mama, with appropriate and specific direction to the original content.

The information contained in this blog is for educational and/or informational purposes only, and is not intended to diagnose, treat, or prevent any condition. If you have any concerns about your own health or that of a family member, you should always consult with a healthcare professional.

Some posts contain affiliate links to various products or services that I recommend. You are not obligated to purchase through these links, but when you do, a small percentage goes to supporting this blog and my family.
Loading Comments...
Comment
×
%d bloggers like this: